Winter "shows its teeth"! Arctic masses towards the Continent, then towards the Balkans! Weather forecasters warn: Here is what awaits Albania in the coming days 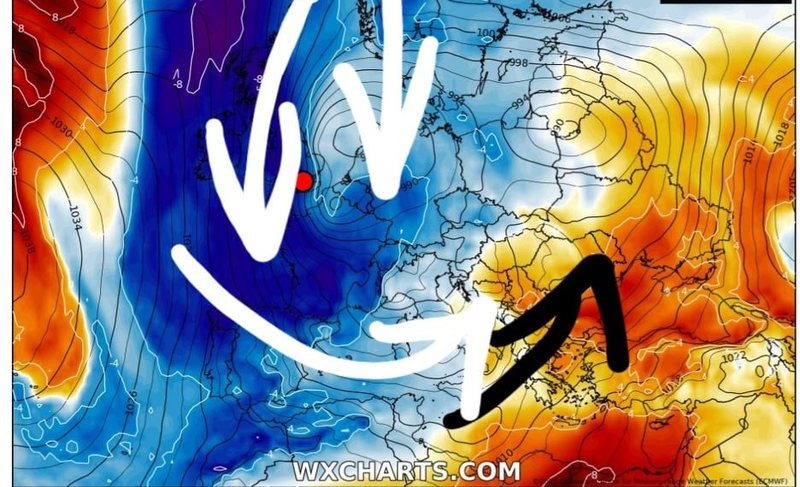 The strong cold air mass of polar origin has started to cover Europe with rain and in many countries even snow. This winter has started earlier than we are used to the winters of past seasons.

The Balkans are still in the warm sector of cyclonic air masses, while cold air from the Arctic has penetrated into many parts of Europe where the first snowfall is expected in many lowlands of the Continent.

The cold polar mass is expected to reach the Balkans starting immediately with the start of the new week. Cold air will move slowly from north to south and will also be accompanied by cyclonic air masses which are rich in moisture to condition rain and snow.

Snowfall is expected in almost all of Europe, starting from Scandinavia and Great Britain, then in Spain and Portugal, Germany, Switzerland, Austria, Poland, Ukraine, Russia, etc. The heaviest snowfalls are expected in Switzerland and Austria, especially in the hilly-mountainous areas where large layers of snow are expected. Snowfall is also expected in the lowlands of Germany.

During the next week, along with the cold polar air towards the Balkans, there will be snowfall, especially in the hilly-mountainous areas of the Balkans, where large layers of snow are expected. We will also have snow in the lowlands of the Republic of Kosovo and some lowlands in Northern Macedonia, Montenegro and Albania.

The amount of snowfall is still disputed in the lowlands and we have to wait another day to be as safe as possible, but one fact is almost certain that the hilly-mountainous areas are expected to benefit from large amounts of snow. With an eventual cyclone in the place and the right moment, we can have heavy snowfall in the lowlands, but for this it is better to wait a little longer and see./MeteoBallkan