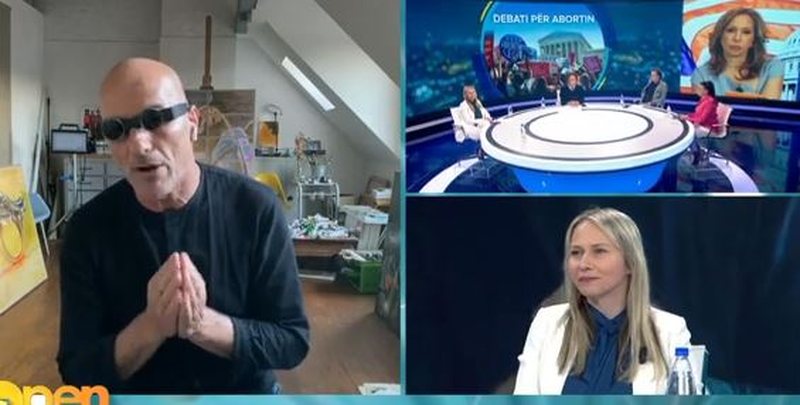 Artist Robert Aliaj said that he is in favor of abortion and that it should happen, because according to him, otherwise giant problems would occur.

In the show "Open" on News24, he said that abortion is a problematic phenomenon, while he took examples such as Belgium and the Netherlands where abortion is controlled.

"Abortion is a problematic phenomenon. But, it seems like abortion is so horrible. It is controlled in Belgium, the Netherlands. Many girls and women from Belgium go to the Netherlands if they have passed the three month period. I am in favor, because giant problems will arise, which will no longer be controlled, all kinds of pups in black, all kinds of doctors and clinics, people will die, that things will get out of control. Controlled, in logic and when there is also ethics within that it should happen, it should be done. "Abortion is absolutely wrong," said Aliaj.

Further, the famous artist spoke about the rights that men have in this process, where according to him, at the moment of abortion, women do not ask men and take all the priority themselves.

"I do not see it at all as a pro-counter debate, because it is understood that society and public opinion is very polarized and this is judged with emotion. It is a phenomenon that requires more love than logic. So people have to speak with their hearts, that it is not the life of only two people. The male is actually forgotten, which is important. Let’s take the normal case, when he errs by negligence.

Family life is progressively destroyed, with the idea that your body, your wealth, does what you want, and so on. In fact, that child is also conceived by a man, who is not asked at the moment of abortion, as he takes all the female priority, who says "who asks you", while where the child is born he says "now hold it". "So it is a very delicate issue," he added.

Anuela Ristani: It is absurd to talk about men's rights when there is none of the 9 months a day when the husband bears a burden. So if in the process of conception it is 50% responsible, in the process of pregnancy it is not responsible. We are talking about the right until the child comes to life. I am very sorry and I am very hurt personally as a woman who has to balance my right as a woman and as a bearer of this burden with the right of a man who has zero role in the period of pregnancy. Let us talk about social responsibility, about responsibility during the conception of the child, but at the moment of the physical process of the thing we can not balance the rights of women and men until a way is found to transport the fetus to a man.