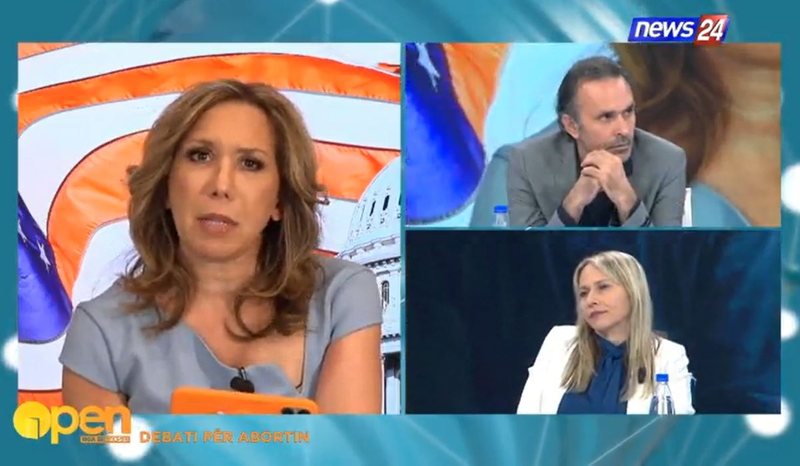 Even in the studio of "Open" did not pass without a clash of opinions regarding the decision of the American Court to ban abortion by law.

Activist Evi Kokalari spoke in favor of this opinion, but on the other hand she "clashed" with the opinion of the Deputy Mayor of Tirana, Anuela Ristani.

The latter said that it is the woman's right to make the decision to have an abortion or not, while she said that in 9 months the man does not bear "any burden".

"I am against Ristan's opinion, because the responsibility falls on both and the right as well. The right to abortion should not only be a woman, but I say that I was impressed by the logic, without wanting to offend the lady, because everyone has his own mind. As for the debate, there are two things here, what we can say from our political convictions, and the second is what has happened and they misunderstand it. No one understands why this decision was reversed. The decision of 1973, the reason for this is that no court has the right to make a law, the only task it has is to interpret the constitution. Every state has the right to decide whether it is legal or not… Now if you in a state are going to make a difference, go and talk to the politicians of your state to change the laws in your state. The positive thing with this decision is that it gives power to the people and removes it from the court.

Ristani : It is very comfortable to do this debate here and say that someone has the opportunity to go to another state, but not all families in America have the right to leave, and other conditions. So practically we are saying that your right as a woman to decide for your life in a certain state, which has enthusiasm before giving birth but no support for the current life of women, to take care of everything but the mental, financial health of women no problem…. this is not an argument, because the data show that most of them have the opportunity to go to another country and perform an abortion.

Kokalari : The lady talks about the financial impossibility of a woman to go to another country, while 5 min ago she took away all rights from the man. You should not be completely irresponsible but the responsibility of the father for 9 months that you have in the womb, he has no right

Robert Aliaj : We remove the responsibility as we please and then give it to him with all the costs that we violently cover him as a society. All lives are important, they have the same value. Let's give all three dimensions equally.

Kokalari : Her logic is the most leftist hypocrisy, because she just said that as a man you have no right

Ristani : It is not hypocrisy that we protect children before they are born and we do not protect them after they are born.