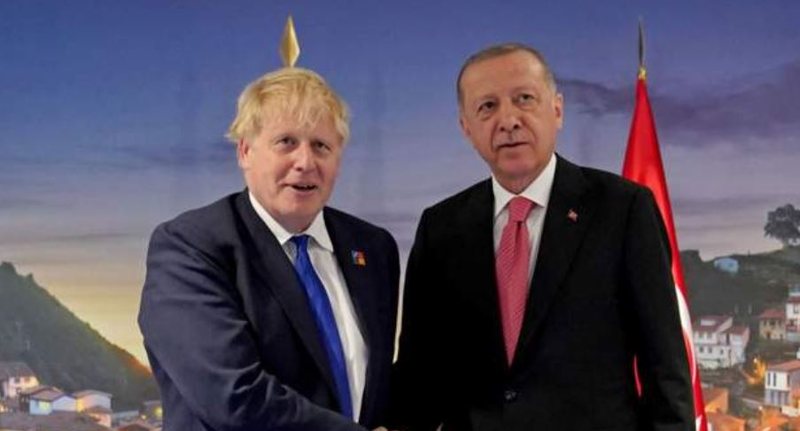 The Prime Minister of the United Kingdom Boris Johnson met today at the NATO summit with Turkish President Recep Tayyip Erdogan, where he congratulated him on the issue of grain extraction from Ukraine.

The two, meeting at the NATO summit, discussed the accession of Finland and Sweden to the alliance, with Johnson welcoming an agreement between Turkey (an existing member) and the Nordic regions that allows them to join the alliance.

Johnson told Erdogan that the accession of Finland and Sweden to NATO would make the alliance stronger as we look forward to a more dangerous decade, said a Downing Street spokesman.

On the issue of wheat exports, Johnson stressed that President Putin's continued blockade of Ukrainian ports is creating an international humanitarian crisis, both in Ukraine and around the world.

Video/ The 27-year-old "goes crazy", uses his child as a shield in the confrontation with the police

Horror event/ The young man opens fire in a nursery, at least 35 dead! The perpetrator returned home, killed his wife, child and... (Video)

What is going on with Putin? Doubts are growing about the health of the Russian leader on the eve of his 70th birthday, it is suspected that he has been visited 35 times for...

Names/ Suppressing peaceful protests and shutting down the Internet, the US takes the drastic decision for 7 Iranian officials

The vice president of the USA has an accident, this is how the health condition of Kamala Harris is presented (VIDEO)

The expert close to the Kremlin makes the scary warning: The decision on nuclear weapons has been made, Putin wants to take...

Which countries pay teachers the most and the least in Europe?

Unusual/ The family was notified of his death, the doctor in the morgue found the 55-year-old with signs of life

What happened? The dictator of North Korea, Kim Jong-un, "disappears".

It is compared to Baba Vanga, who is the 19-year-old who has made 11 predictions this year