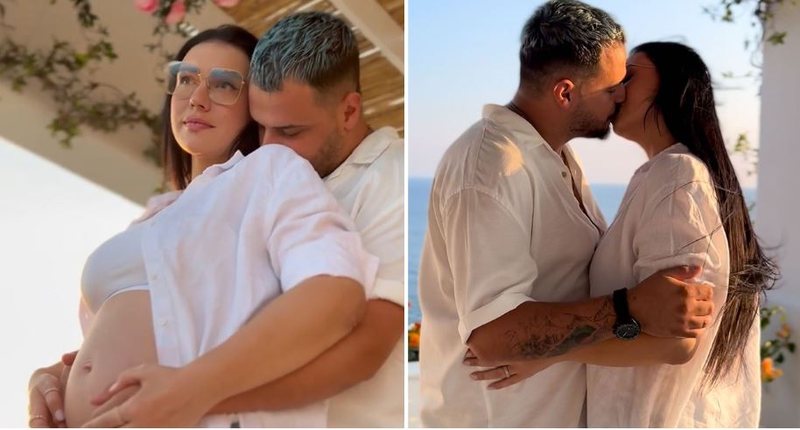 The pair have recently spoken in an interview, where they have shown how they received the news of pregnancy and the reaction of the couple's parents when they found out that they will become grandparents.

Dagz said that his family members were "flying" with joy, while Angel said that it was more difficult to tell this news to her father, who did not expect such a thing to happen so soon.

"When the parents found out, they were overjoyed. I've been telling my sister when she's going to have a baby for a long time," said Dagz.

"At the moment, since Dagzi is all the time on the move on business trips, I have been living in Tirana while Dagzi comes very often, I went to Kosovo" - Einxhel added.

"I was a little shy, because my father never asked me to be the one who gets married and has children. He has not conceived that I will have children so soon. It was a very special emotion to share this news with him and he was the hardest person I could tell it to," she concluded.

"We don't know the gender, we will share it with all the close people, let's have a party. For the holidays, we are waiting for Dagzi to be released from work, we have given him some holidays, but he will have them again".

As for the couple, they showed that they took the situation with sportsmanship and were not worried at all, even joking with each other. Angel said that the fans seem to have expressed this to him since everyone wrote to him to have a child and this seemed impossible for the duo.

They showed that even inside BBV's house they had discussed such a thing and Dagz had told Angel that he would make a tattoo for him when he became a father.

"I know with my accounts when it happened, but let this remain private." We have been together all the time, if there is one person with whom I have shared this situation the most, it is Dagz. I told him that I doubt that "we" are pregnant" - said the moderator, for Panorama Plus.

"It's a very special feeling, I still didn't believe it until I heard the heartbeat" - the artist said.

"It was pretty high"/ Bora Zemani reveals publicly, this is how much her first salary was

"I've imagined it since I was little..."/ Will present the popular show, Bora Zemani confesses her emotions

Rare! The Albanian model ends the relationship, posts the sweetest moments with her ex-boyfriend (VIDEO)

From working as a bricklayer to "retirement", Kledi Kadiu recounts the sacrifices he made in his early days in Italy

"Bora took me on the phone", the Albanian dancer reveals how he got the invitation from the popular show

All Names Revealed, Meet All the Dancing With The Stars Judges

"I ask God to have a happy life", Arbër Hajdari dedicates the sweetest words to his partner

Arbër Hajdari and his partner Vlera Devolli crown their love in marriage to...

Would he relate to the simple and polite chuna? The Albanian moderator leaves the follower 'with a finger in his mouth' with her answer (PHOTO)

Leila Kraja is one of the sexiest and most popular Albanian moderators. She has ...

After breaking up with Casey, Stresi is caught between kisses and hugs with the mysterious girl (Video)

From cohabitation to joint business, Bora e Donaldi ready for the next step after the sensational comeback

The game of Snow and Donald ends. The moderator has published the first photo wi...

Flirt with movie actress +18? Don Johnny messes up the network with the latest details (PHOTO)

After a few months of the sensational breakup with the Russian model, Don John s...

"I don't get tired of..."/ With the sweetest words, Fifi confesses about her partner (Photo)

The singer from Ferizaj, Filloreta Raci, in addition to a successful music caree...