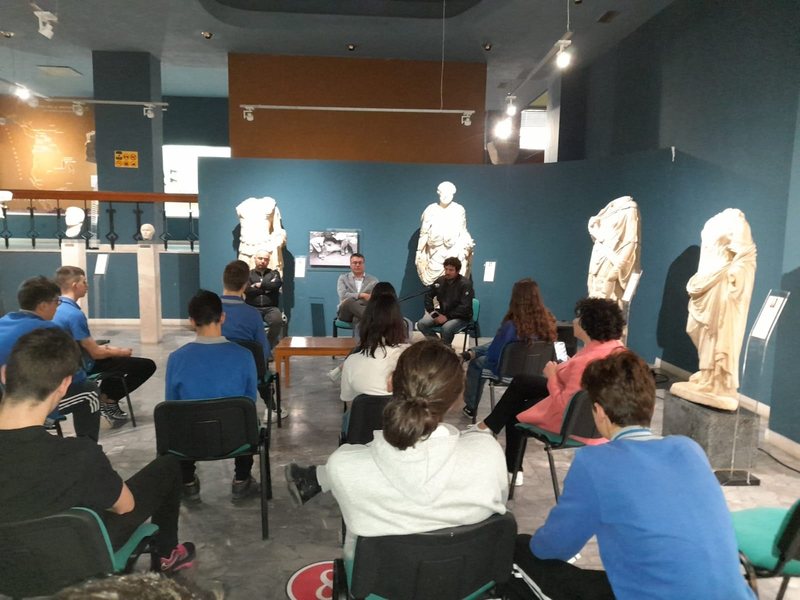 The National Historical Museum continues the cycle of activities entitled "An afternoon at the museum". These periodic meetings are entitled with the aim of sensitizing the Albanian society on various issues of Albanian history, culture and national heritage. In the framework of the initiative "Europe Days at the National Historical Museum" in the premises of the Ancient Pavilion was held the next meeting where the students of the school "Protagonists" were invited. Director of the National Historical Museum, dr. Dorian Koçi, in his speech emphasized that these activities are part of the calendar of European cultural weeks. "It is worth noting that an important part of cultural heritage information is included in history textbooks and Albania is one of the countries with a diverse rich cultural heritage. "There is a large map of ancient cities from which our archaeologists have unearthed monuments that represent us with dignity in the entire cultural ensemble of Europe," he said. Koçi further continued that many foreign visitors or even diplomats and ambassadors, who visit our country are surprised by this cultural, archaeological heritage of Albania. "Many monuments from the ancient cities of Antigone, Butrint or Amantia are also exhibited in the National Historical Museum", said dr. Koçi. Following dr. Jamarbër Buzo from the Institute of Archeology delivered the speech: "The ancient city of Amantia as part of European culture". Dr. Buzo first explained some facts about the founding of the city of Amantia. "Amantia is located southeast of the city of Vlora on a hill 690 meters above sea level. Recent excavations have confirmed that the founding of the city dates back to the 5th century BC. From inside the enclosure we have very little information, what has been studied more are the social, cultural buildings, outside the building. "The cycle of centuries preserved an entire civilization already left with ruins, within which the traces of the acropolis, stadium, temple and retaining walls remained", he emphasized.

GAT a memorandum of cooperation with the Association of Visual Artists of Kosovo for activities, planned and the Museum of Tirana as a museum of Albanians

Margariti: Abigeila Voshtina to be at the right height to raise the artistic quality of the theater

Neritan Ceka: The state negligent towards archeology and Albanian archaeologists are left aside, the National Historical Museum to become a national museological center

Western Balkans Ministerial, Margariti: The Cultural Platform as a Bridge of Communication

"Contract" premiere in the theater, director Ledian Gjeçi: The work has a strong message, which warns of the consequences of extreme selfishness

Duncreagan with Irish, Scottish and Albanian ballads at the Academy of Sciences

Paris, Geneva, New York, Prague and Berat part of the exhibition "City Landscape", Arben Golemi: Works with impressions I have from the architectural landscape of some cities

Rozi Kostani: More appreciation for artists because they are the most discriminated layer, the National Theater is elite and needs a better selective criterion