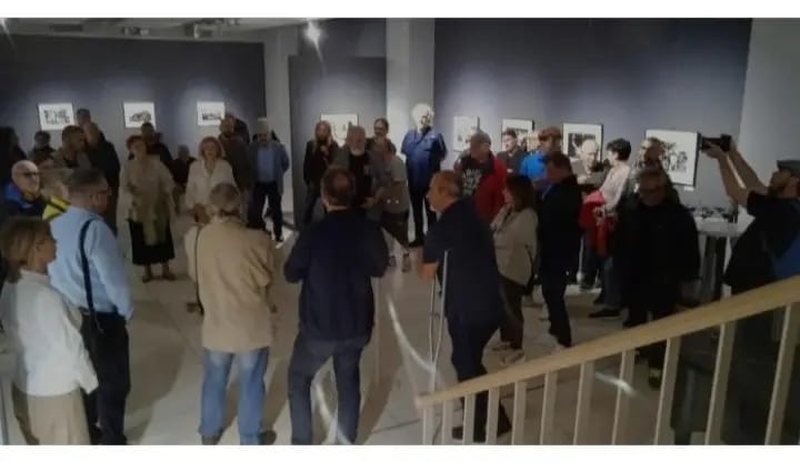 The "Fokus Award" festival in its 13th edition came with innovations and events in Fier and Tirana. The opening of the festival officially crowned the annual competition organized with the participation of hundreds of Albanian photographers, from all over the world, but also many photographers and art lovers from all over the world, but at the same time it also opened the door to parallel exhibitions. As part of the festival, the exhibition "Historia Remains" by Francesco Cito was opened at the "Kalo" gallery in Tirana. Born in Naples, Italy, in 1949, he is one of the few Italian photographers who has won two "World Press Photo" awards (the most important international award for photography). After his beginnings as an independent photographer, he emigrated to London in 1975, the year he got his first cover for the "Sunday Times" magazine. At the age of 30 he was one of the first photojournalists to arrive clandestinely in occupied Afghanistan. Since then, he has covered as a correspondent, for many international newspapers and magazines, the bloody conflicts in Lebanon, the West Bank, the Gaza Strip, Afghanistan, Kuwait, Bosnia-Herzegovina, Kosovo, Albania, etc. In our country, for the first time in Albania, an exhibition with his cycle "Historia Remains" is exhibited. Within the framework of the festival, the "Vilson Kilica" gallery in Fier opened on September 24 the photography exhibition with the theme "The Other" (floor 1), as well as the exhibition of other categories of "Fokus Award 2022" (floor 2) . In the "Bylis" theater, Fier, in the central lobby, the exhibition "Ambassadors of Italian Photography in Albania" was opened on Saturday. in collaboration with FIOF - Italian Photography Fund Orvieto, where the "Fokus Award" awards ceremony followed. The exhibitions near the "Vilson Kilica" gallery will remain open for two weeks and according to the tradition of the "Fokus Award" they will travel outside Albania.

The organizers in the material about the festival state that "Fokus Award" over the years has constantly been a showcase and expression of the strength, complexity and fragility of Albanian photography, with a wide community of artists around it but even more, with a clear flow of thoughts, ideas and debates about the artistic and human sensitivity of the moment. The very high participation of photographers from the region and the world, according to the organizers, shows once again that the interest around the festival is always growing, from 420 applications for all categories, in the exhibitions near the art gallery "Vilson Kilica", the gallery "Kalo", the theater "Bylis" or outdoor exhibition near the Apolonia archeological site exhibited works by 146 photographers from all over the world as well as the personal exhibition of the photographer Francesco Cito. "Masters of Italian Photography" exhibition with 26 Italian authors, etc. The main exhibition of "Fokus Award 2022" is also the theme of the competition, entitled "The Other". This year's festival was organized by "Albania Focus Center" / with the financial support of the Ministry of Culture, Fier Municipality, BenArt Print / in partnership with Fier art gallery, FIOF, EJAlbum. Artistic director Arben Alliaj, project manager Saimir Ahmeti, curators Elton Koritari, Burim Myftiu, Osman Demiri, curator of the exhibition "The Other": Vlora Demiri.