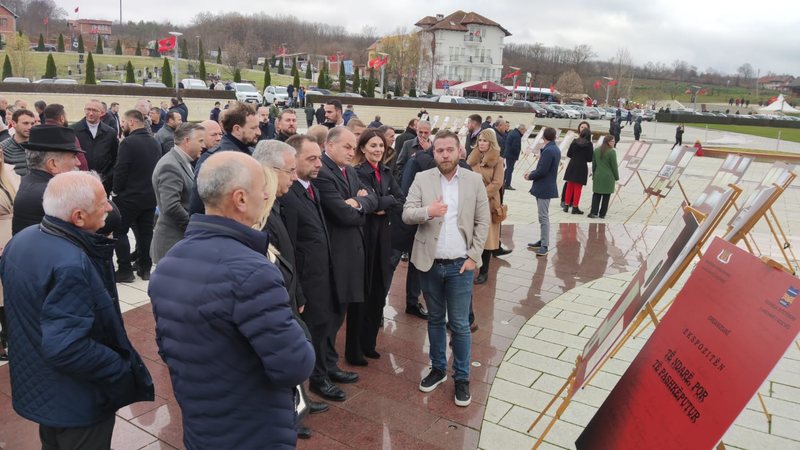 Documentary and photographic materials, illustrating the arduous journey towards freedom and the invaluable contribution of figures with a central role in state formation, were presented in the premises surrounding the "Adem Jashari" memorial complex. In honor of November 28, the main date of the nation's history, the General Directorate of Archives (DPA) and the State Agency of Archives of Kosovo (ASHAK) presented the exhibition "Separated, but not separated" in Prekaz. Present at the event were the head of DPA, Ardit Bido, his counterpart, Bedri Zyberaj, deputy prime minister Besnik Bislimi, deputy prime minister, Emilja Rexhepi, minister of finance, Hekuran Murati, minister of internal affairs, Xelal Sveçla, minister of culture, of Youth and Sports, Hajrulla Çeliku, Deputy Speaker of the Assembly and Democratic Party of Kosovo (PDK), Enver Hoxhaj, PDK vice president, Vlora Çitaku, parliamentarians and other members of the government cabinet. In his speech to the media, Bido emphasized that collaborations of this magnitude coincide with the vision of this historic date for a united and prosperous Albania. "We are celebrating November 28 in Prekaz, as we would celebrate in any Albanian territory. November 28 was from Preveza to Nis, as the delegates gathered. It is November 28 of Skanderbeg, of the KLA, it is a major day of our nation. This exhibition was presented for the first time yesterday on the occasion of the joint meeting of the assemblies of Albania and Kosovo. If we were to encapsulate the vision of this historical date, Albanians should form a common and prosperous state. We are doing this even today, respecting the reality. Even divided into 5 countries, we are one nation. For this Albania to be united in all the elements that make up the national identity, united in an umbrella for well-being, prosperity and national pride", said Bido. As it periodically happens on dates of national importance, the political functionaries first pay homage to the war dead of the Jashari family.