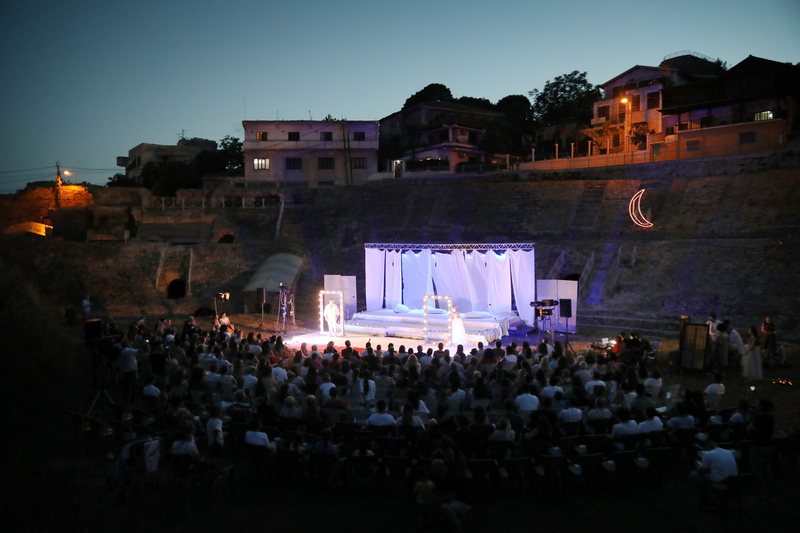 Shakespeare's comedy "A Midsummer Night's Dream" appeared in the ancient amphitheater of Durrës. But the "Aleksandër Moisiu" theater informs on its website that in the coming months, other activities will be in the amphitheater. The theater says that this play directed by Driada Dervishi was welcomed by the public. "After 3 fantastic nights under the moonlight and under the effect of the spotlights of the improvised stage in the arena of the ancient amphitheater of the city, we express our thanks and gratitude to everyone who contributed to the establishment and realization of this beautiful dream of these 3 summer nights" , it is said by the theater. The institution informs that the activities that will take place in the future focus on entertainment in the summer days. "A Midsummer Night's Dream" but also various other concerts will be returned in the coming months in the arena of the amphitheater and in other environments to bring you fun on these hot summer nights ", it is said by the theater. "A Midsummer Night's Dream" is one of Shakespeare's most beautiful comedies and was performed by the artistic troupe of the "Aleksandër Moisiu" theater on the evenings of June 21, 22 and 23 in the Durrës amphitheater. The roles were played by Alesia Xhemalaj, Adelina Muça, Jaho Guma, Amos Zaharia, Romir Zalla, Andia Xhunga, Mimoza Marjanaku, Gentian Zenelaj, Suela Bako, Xhenni Fama, Marcel Rupi, Gjergj Doçi and Marvin Tafaj. Written probably in 1595 or 1596, "A Midsummer Night's Dream is one of Shakespeare 's earliest comedies, but can be distinguished from other works of this group by describing it as an accompanying part for wedding ceremonies. Unlike most of his works (including all comedies), in creating this story Shakespeare did not rely directly on any existing piece, narrative poetry, historical chronicle or any other source, but created a truly original piece. .

Ledia Sulaj: The path with ballet is long and full of sacrifices, to stay in the market you have to constantly work on the roots of the past, looking for the new

The laurel leaves and the treasure of Tepelena's sea urchins...

Pandeli Koçi: Literary criticism has remained in review or 'friendly' form, institutions should develop activities for the problems and development of literature

Maintenance works in Butrint Park, one of the most important heritage areas

Painter Hasan Nallbani with a personal exhibition, landscapes, portraits and compositions are shown to the public

The artists of "MIK Festival" in the museum house of Sterio Spasses, with the aim of promoting the area

The old hammam of the XVII-XVIII century in Durres, after the restoration, a digital element will be added to show the history of the object

Armand Bora: The National Theater and the Opera and Ballet Theater have the same status and it is mandatory that the treatment of the artistic troupe be without differentiation

Gjirokastra Castle and Antigone Archaeological Park, 19,420 visitors during the month of July

The digitization of 75 old registers and 171 documents, which preserve the traces of the photographers of the collection, ends at the "Marubi" museum

New explanatory boards in the ancient city of Orik