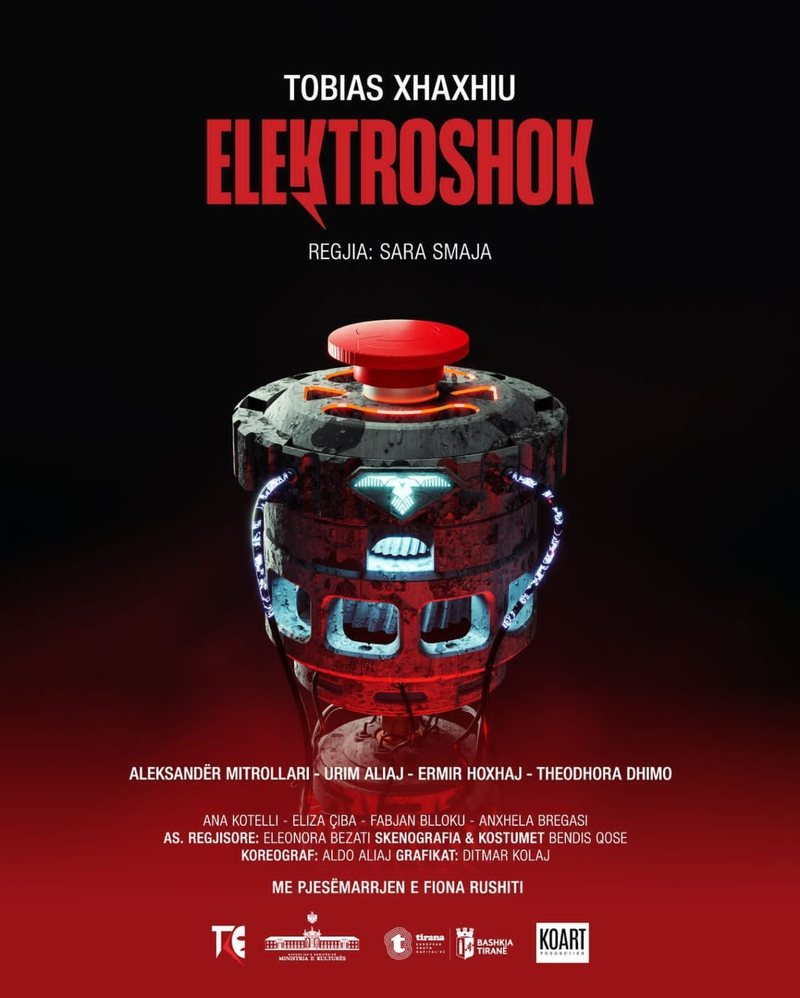 The theatrical work "Elektroshok" marks its premiere this evening on the stage of the National Experimental Theater "Kujtim Spahivogli". Directed by Sara Smaja and author Tobias Xhaxhiu, the theatrical premiere focuses on the freedom of the artist and the use by the authorities. There are four actors in the play and it will be on stage on the evenings of October 5, 6, 7, 8 and 9. With the participation of Fiona Rushiti, the roles in the work are played by Aleksandër Mitrollari, Urim Aliaj, Ermir Hoxhaj, Theodhora Dhimo. In the explanatory material about the work, it is said that it is centered on a playwright, who from the beginning decided to commit suicide to escape the torture of the Secret Service. "But an unexpected invitation to the residence of the Supreme Leader saves him at the last moment. There he will face a decision that will question not only his conscience as an artist, but also the fate of humanity itself. The show focuses on the freedom of the artist and how they are used by the government, which in the case of "Elektroshok" is a totalitarian regime. How the regime is treated in the show is undefined, but at the same time it may evoke associations with similar regimes over the years. The freedom of the artist and of man in general is at the center of the show", says the premiere work. Interpreted by the young and talented actor Aleksandër Mitrollari, the Supreme Leader will introduce us to the darkest sides of absolute regimes, capable of penetrating the dreams of ordinary citizens. The interpretation of the young and talented actor Urim Aliaj will introduce us to the limits of what someone is capable of doing to protect freedom and dignity. Directed by Sara Smaja, scenographer/costume designer is Bendis Qose, choreographer Aldo Alia, as. director Eleonora Bezati and graphics Ditmar Kolaj.

"Elektroshok", a work that premieres in Albania, is a production of the Theater Fund for Young People, with the support of the Ministry of Culture and the Experimental Theater "Kujtim Spahivogli". The Ministry of Culture allocated a fund for young people in the amount of 10 million new lek and through the National Experimental Theater "Kujtim Spahivogli" directors up to 35 years of age are supported. The fund, as previously announced, goes to theater works, in the realism period of April-December of this year, where the first work was the one entitled "Panik", which came to the stage in June in the theaters in Tirana. In this fund there was a high number of proposals, where there were a total of 39 such and the pieces to be on stage were chosen by the artistic board of the National Experimental Theater "Kujtim Spahivogli. The projects benefiting from this fund are realized under the auspices of the National Experimental Theatre, while the district theaters support the projects of this fund, through theater logistics. For several weeks, theater shows have been staged on different stages, which are being realized through the budget from this fund for young people.