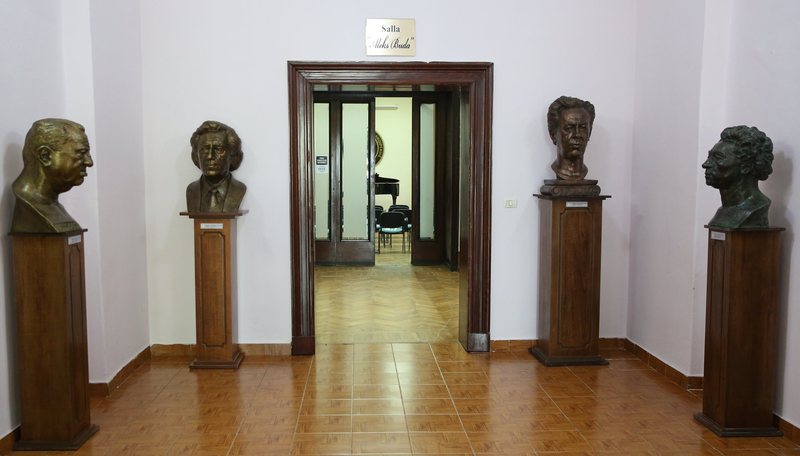 As part of the Year of Academics, on the 50th anniversary of the founding of the Academy of Sciences, the Albanian Post opened the philatelic exhibition with portraits of Albanian academics inaugurated in postal shows. The exhibition that opened on September 29, on National Heritage Day, was prepared by the Albanian Post in cooperation with ASH and was displayed in its premises. The administrator of the Albanian Post, Mrs. Anisa Kaltanji and the president of the Academy of Sciences Skënder Gjinushi participated in the opening of the exhibition in the lobby of the Academy of Sciences. At the opening ceremony, Acad. Vasil S. Tole, vice president of the Academy of Sciences of Albania and Mrs. Anisa Kaltanji. Ms. Anisa Kaltanji, the administrator of the Albanian Post said that this exhibition comes within the framework of events planned for the 50th anniversary of the founding of the Academy of Sciences on October 10, 2022 and for the 110th anniversary of the Albanian Post on December 5, 2022. Akad. Vasil Tole said that the exhibition of postage stamps with portraits of academics is done by the post office in the context of its 110th anniversary, since the government of Ismail Qemali, a week after the raising of the Independence Flag, established the Ministry of Post and Telegraph headed by Lef Nosin. This collection, part of the archive of the Albanian Post, contains stamps with the figures of Aleks Buda, Eqrem Çabej, Ismail Kadare, Shaban Demiraj, Mahir Domi, Kristo Frashëri, Odhise Paskali, Dhimitër Shuteriqi and Dritëro Agolli, which were exhibited together for the first time. seen for the general public. Family members of these personalities also participated, acad. Dhimitër Haxhimihali, son-in-law of Aleks Buda, Floriana Paskali (daughter of Acad. Odhise Paskali), Etleva Domi (daughter of Acad. Mahir Domi) and Eglantina Demiraj (daughter of Acad. Shaban Demiraj). Floriana Paskali, Etleva Domi and Eglantina Demiraj spoke on behalf of the families of the academics inaugurated on the Albanian postage stamp and proudly remembered the contribution of their relatives over the years.