"Zare", with heritage values ??reflected in songs and dances by the artists of the Popular Ensemble 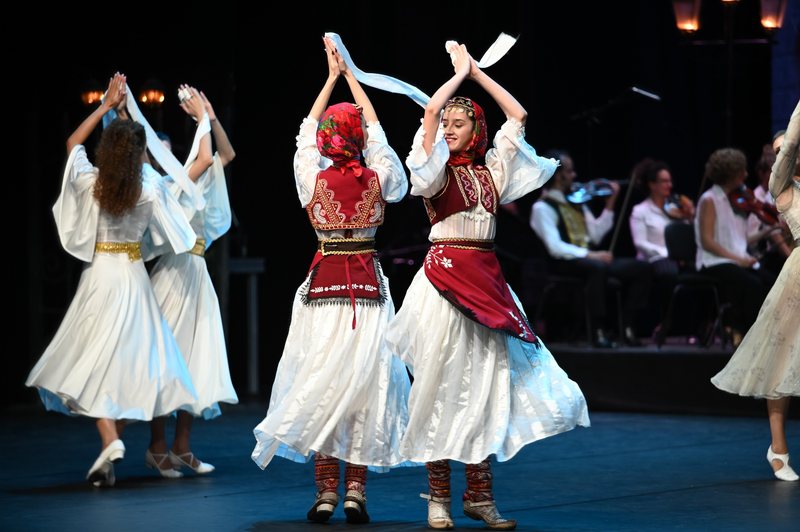 The first premiere this artistic season of the National Ensemble of Folk Songs and Dances was "Zare". An ethno musical, which was shown for two nights to the public and dealt with the theme of love between two young people. The National Theater of Opera, Ballet and Popular Ensemble says that for two nights in a row the heritage values ??came with the artists of the ensemble. "The precious values ??of our cultural heritage reflected in folklore with songs, dances, rites and wonderful costumes all came together for two nights in a row in the hall of TKOB by the artists of the Folk Ensemble of Songs and Dances. With the rhythm and energy that characterizes the troupe of TKOB artists, the performance of the last night of "Zare" ended again with applause from the audience", says the institution about the performance that was on the evenings of September 14 and 15. Earlier, the artistic director of the ensemble Sokol Marsi said that such works have been missing on our stage. "Zare" is an ethno musical with three acts. It is a novelty show for the Albanian public, as it is not just an ordinary show, but a complete musical where music, dance, song and acting are combined. There has been a great lack of such works on the Albanian stage, even more Albanian, as I emphasize that all the musical and choreographic material is authentic Albanian brought back to the stage with mastery by the musician Edi Xhani and the choreographer Andrea Kokeri", he said. Mars. "Zare" was with the participation of the orchestra, dance group and choral group of AP, symphony orchestra of TKOB, music band, ballet school dancers, ballet group "IDAA". Music by Edi Xhani and choreographer Andrea Kokeri. Solo singer: Ilir Shaqiri, Aranit Hoxha, Iris Bega, Sofika Kola. Dance soloist: Ajkana Topalli, Rei Berisha, Genci Kastrati, Enkelejd Bajraktari, Marjana Shkreta, Olta Ahmetaj, Elton Cefa, Gëzim Halili, Jera Curcia, Mirela Bekteshi, Leonard Mitrushi, Endri Sejati, Arlinda Mulgeci, Helga Saraçi.