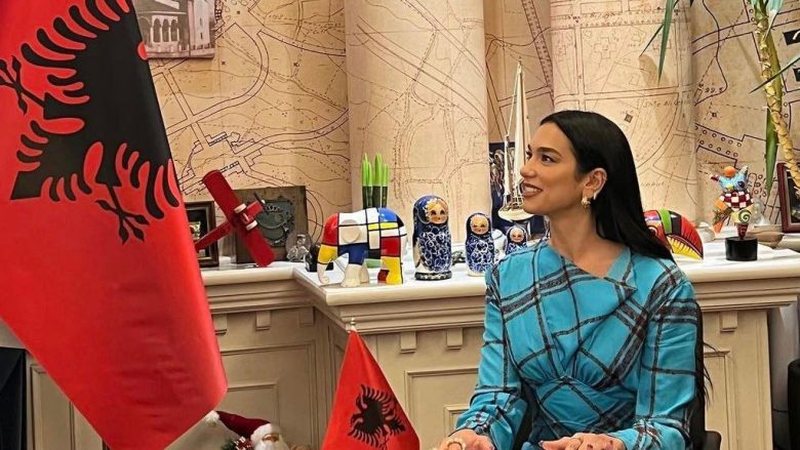 The big concert for the 110th anniversary of Independence Day will be held this evening in "Skënderbej" square in Tirana, where the singer Dua Lipa will sing. The singer was previously sworn in as the youngest Albanian citizen before the Mayor of Tirana, Erion Veliaj, in a special ceremony. Mayor Veliaj said that this is a very special day, because an icon of world music like Dua Lipa is officially an Albanian citizen today. For the world music star, Dua Lipa, this is a moment of indescribable joy and the next time she will travel to Albania, she will use the Albanian passport. "I am very moved by the hospitality, love, support. I can't wait for tomorrow's concert", said the singer Lipa. As part of her music tour, the singer has organized concerts in several countries during this time. Previously, Dua Lipa was received by the head of the Albanian state, Bajram Begaj, who handed over her Albanian citizenship. Dua Lipa benefits from Albanian citizenship as a person of "special interest", and this is related not only to her career as a singer awarded with international awards, but also to her involvement in social causes, such as her commitment to the United Nations Agency United Nations Children's Fund (UNICEF), in support of children's rights campaigns. When Dua Lipa was 19 years old, she released her first song, "New Love" (2015). Through this song, she won the love of many young people around the world. In the same year, she released the second single, "Be the One", a song which put Dua at the top of the British charts as the best new artist of 2016. After that, Lipa did not stop. and so released her next single, in February 2016, entitled "Last Dance", which was a great success. To follow and with other musical hits.