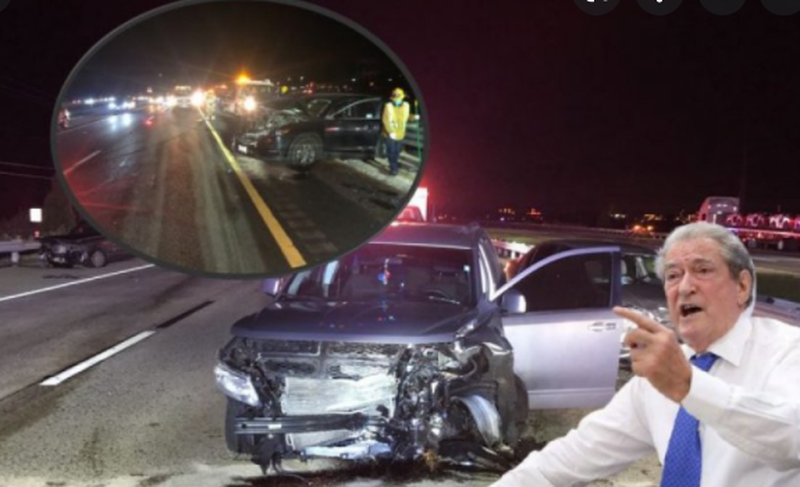 The escort of former Prime Minister Sali Berisha yesterday after the "Foltore" of Kurbin suffered an accident on the highway of Laç. The car where Berisha was traveling and three others accompanying him were traveling one after the other on the Laç highway when a car that ran out of fuel entered the highway and came face to face with the line of escort cars. The car where the former prime minister was traveling could have deviated without injuring the driver, as well as the other three accompanying cars could have been avoided, while the fourth car braked. As a result, the fourth car of Berisha's escort was hit by another car from behind. Three people were injured in this accident, the driver and two companions, while the former prime minister is out of danger for life and has not suffered any injuries. The causes of the event are a mystery, as the driver left abandoning the car and it is not known if it was intentional event or accident. "On the road axis Milot- Fushë Mamurras, the vehicle driven by the citizen AM, hit the vehicle driven by the citizen SL, and then hit the escort vehicle of the deputy SB. As a result, 2 citizens residing in Kosovo received minor injuries. The investigative group is at the scene and is working to fully clarify the cause and circumstances of the event ", the police announces. driver Sali Lazri, 28 years old from Tirana, and then hit the escort vehicle of Berisha escort, as a result of which 3 people received minor injuries: Edi Sinani, Albinin Menitovic and Sali Lazri. They are receiving treatment in the Laç emergency room. The former prime minister began his speech with the Kurbin Democrats with a minute of silence for the 51 victims of the earthquake two years ago, as he described the event as a state crime. Even in this Foltore, there were accusations against Basha, whom he reminded again of the two files, that "Muzin" and "Toyota Yaris", saying that the lobbying investigations were closed with the intervention of Prime Minister Rama without giving justice.