Food prices on the rise and oil in the stratosphere, the deputies do not put their hands in their pockets, over 140 million lek in the month of May for diets, fuel, telephone offers and hotels 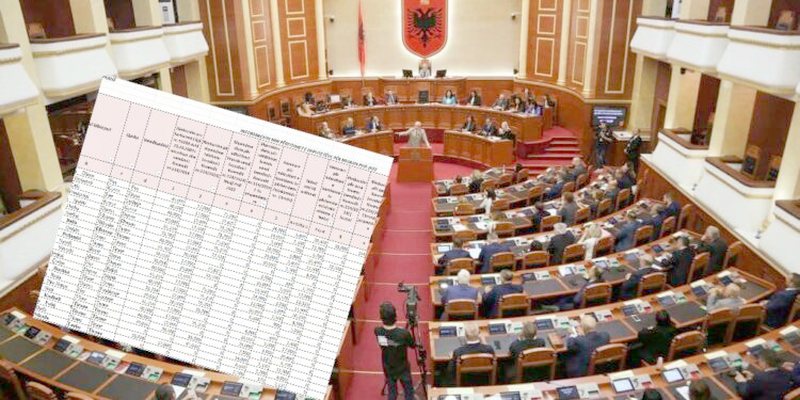 Although in Albania for several months the prices of food and fuel have increased, the Albanian State Budget continues to keep the legislators in Albania on their toes. This is because the internal political struggle to be as high as possible on the party leader's list so that they have more opportunities to enter the Parliament is also justified by the monetary benefits. In addition to the fixed salary, MPs have other financial benefits that are made available by the Parliament of Albania. Only during the month of May of this year, 27 of them have cost the State Budget over 14 million new lek, an account that does not include fixed salary, but per diems for travel within the country, hotel bills, expenses for telephone offers, fuel reimbursement as and rent payments. It is about 19 deputies of the Parliament of Albania,

The district of Fier broke the record

The district of Fier holds a record, 3 democrats and 3 socialists have each requested 35,000 ALL for rent and 40,000 reimbursement for oil. But these allowances were not enough, so they also received 75,000 ALL allowances to move around the areas for meetings, but this money did not cover the expenses. Each MP received another 17,000 ALL to communicate via mobile phone despite the fact that the monthly telephone offers on the market cost much less. Thus, the deputy of the Democratic Party, of the District of Vlora, Arbi Agalliu has not managed to get the full rent for only 14 thousand lek, while during the month of May, the deputy of the Social Democratic Party, Gledis Çeliku, and the socialist of Vlora, Pranvera Resulaj, have Parliament's money and diplomatic passports.

The month of April, here are the benefits that the deputies enjoyed

Earlier, the "SOT" newspaper also published details about the month of April that just went as far as per diems allocated by the State Budget for the deputies of the Parliament of Albania. According to the data of the Assembly, for the month of April, 14,265,163 new ALL went to the benefits of the deputies. According to the law on the status of the deputy, legislators benefit from per diems to go to the constituencies, benefit from fuel for the car, reimbursement of phone calls and honoraria for participation in commissions. However, from the data for the month of April, it appears that there are 21 MPs from Tirana who received diets. "Pamphlet" has published the list of names below. It is about MPs from all political camps. It is not known what services they have provided outside of Tirana, when they have their constituency in the capital. Meanwhile, we have a number of 22 deputies, most of whom are from the districts and have refused to receive the diets. Some of the names are: Taulant Balla, Fatmir Xhafaj, Lulzim Basha, Sali Berisha, Damian Gjiknuri, Flutura Açka, etc. As for the reimbursement for fuel, there are 3 names that have refused it and they are: Lindita Nikolla, Ermonela Felaj and Agron Gjekmarkaj. Meanwhile, the rest received 40,000 lek each in April for fuel reimbursement. In total, 4,432,343 ALL came out of the state coffers in April for the reimbursement of MPs' fuel. Regarding the refund of the phone, we have Gjekmarkaj, Nikolla and Felaj who did not benefit. All others have received 17 thousand new lek each. For the month of April, a total of 2,128,767 ALL were spent to reimburse the calls of MPs. Meanwhile, we have 17 deputies from the districts who benefit from rent reimbursement. Below is the list of names. They receive a new 35,000 lek per month. In total, for the month of April, 599,667 ALL went to rent reimbursement. As for the fees for participating in commissions, the deputies have benefited in total, 1,061,225 ALL. So, in addition to the hefty salaries that MPs receive, their monthly benefits take out of the state coffers about 170 million Lek per year for per diems, fuel, rent and telephone.

"Political and moral winner", surprises Baton Haxhiu: Regardless of the court's decision, PD is led by Berisha

The former head of the State Police predicts what will happen after the release of the former deputy from prison: It will get worse, not for Alqi Blako, but for...

Flamur Noka makes a strong statement and warns: National security is at risk, Albania was not attacked only by Iran

What day did the President call you? Oerd Bylykbashi clarifies the face-to-face meeting with Begajn: I broadcast an attitude

"Existential crisis", Arjan Çani reveals the purpose of Rama that is hidden behind the primaries: Imagine now that it starts to divide...

The release of Alqi Bllakos, Voice of America: The two small children have no care

The issue of the sea in The Hague, Rama meets with Mitsotakis: We still do not have a consensus with Greece