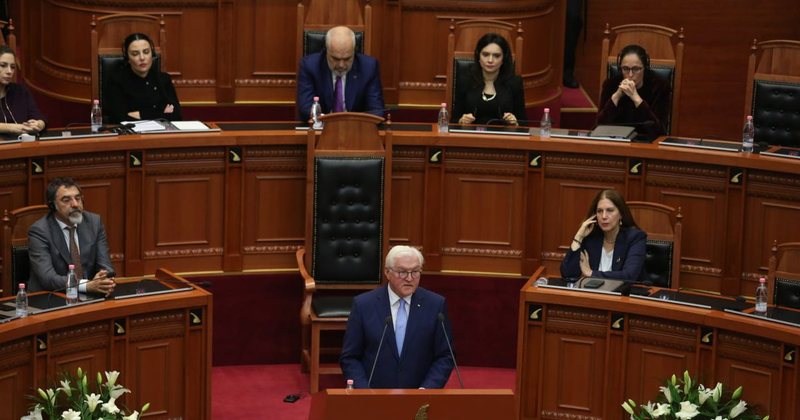 German President Frank-Walter Steinmeier visited Albania yesterday. The German head of state first met with his Albanian counterpart Bajram Begaj and then gave a speech in the Parliament of Albania. He then continued with official meetings with Prime Minister Edi Rama and the mayor of Tirana, Erion Veliaj. In his speech, Steinmeier called on Albanian politics to cooperate as much as possible within the framework of EU integration, as well as for the successful completion of the Justice Reform. Also, on the other hand, he did not mention at all the joint regional initiative Serbia-Albania-North Macedonia, "Open Balkan" (so-called Balkan Mini-Schengen), but requested the implementation of the 3 agreements signed on November 3 in within the Berlin Process, Germany's initiative for the integration of the 6 states of the Western Balkans.

Steinmeier in the Assembly: Reform in Justice to be completed, fight against corruption
In his speech to the deputies of Albania, after high evaluations for the pro-European spirit of the Albanians, Steinmeier focused on the tasks assigned to the political class in the country. He demanded from the government the completion of the Justice Reform, a joint US-EU initiative, as well as the fight against corruption, organized crime and other major criminal phenomena. On the other hand, the German leader underlined the need for cooperation between the majority and the opposition in the context of accelerating the EU integration process. Steinmeier guaranteed that Germany will not spare Albania's support on the way to joining the big European family. "Continue to work in the fight against obstacles, in the fight against corruption. Follow the initiated justice reform and work across the trenches between the opposition and the government, work together.
Steinmeier gives importance to the Berlin Process: Ratify the 3 agreements, the summit next year
Earlier, during the joint conference with the Albanian head of state Bajram Begaj, the leader of Germany, Frank-Walter Steinmeier stopped at the Berlin Process. He praised the Albanian government for signing 3 agreements on free movement, recognition of diplomas and professional qualifications, on November 3 within the Berlin Process, together with the other 5 countries of the Western Balkans region. In continuation of the Berlin Process, Steimeier asked the Parliament of Albania to ratify these agreements to enable the start of shortening the geographical and bureaucratic distances between the countries of the region. He emphasized the importance of this process, recalling that the Berlin Process Summit will be held in Tirana next year. "I contributed to the signing of 3 important agreements between the countries of the Western Balkans on November 3. They will change people's reality. The ratification and implementation of the agreements will shorten the distances with the EU markets, transforming the region to make it more competitive. Next year, the Berlin Process Summit will take place in the region. Germany will continue to be by Albania's side", declared President Steinmeier alongside his Albanian counterpart Bajram Begaj.

"Is there information about McGonigal's entrances and exits?"/ Bledi Çuçi after the Government meeting says whether he has met McGonigal who is under investigation

The next plan is revealed/ What was the file that was taken hostage by Basha? Sali Berisha breaks down the facts