Rama supports Albania-Kosovo union: One day it will happen, divisions for the "Open Balkans" do not affect the relationship between us 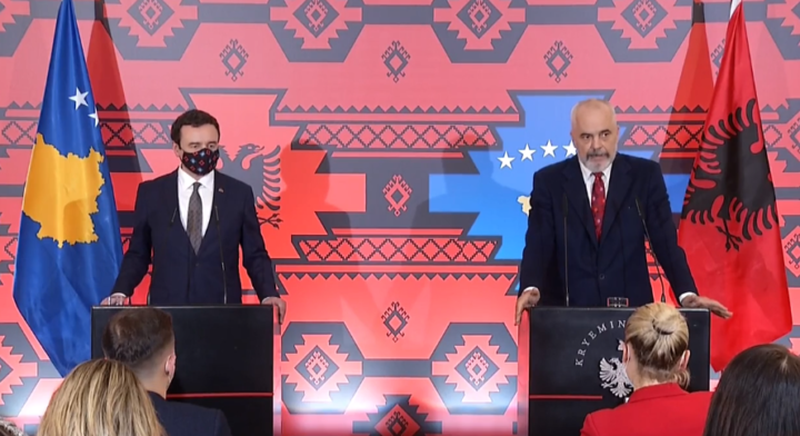 Prime Minister Edi Rama stated yesterday that the Albania-Kosovo union will happen one day. After the joint meeting between the two governments, the Prime Minister appeared at a conference together with the Prime Minister of Kosovo, Albin Kurti. Rama said that if there was a peaceful referendum on the unification of the two countries, he would vote openly in favor. The Prime Minister said that the Albania-Kosovo union will happen one day, but I do not know when that day will be. According to him, this was a provocative question which received a provocative answer. "It's a question or a provocation. In case you ask me on the hypothesis of a peaceful union referendum I would be breaking the law and voting openly Pro. If you ask me if it will happen or not since it is provoking me I also provoke you and tell you it will happen, but I know when it will happen, one day I say it will happen. I tell those who will come out and shout about a greater Albania, I say that fortune tellers are not judged. That it is a fortune and if I were to cast a fortune and throw it with imagination that I do not throw the cup but say it can happen. I put the fortune in the middle for the translators, help me and you say that the voice of the fortune teller spoke and not of the responsible politician and prime minister. You responded to provocation with provocation. "Two fortune tellers are not asked twice", said Rama. On the other hand, Kurti said that national unity is not an issue that we choose but chooses us, adding that two countries can not decide on such historic processes. "National Unity is not something we select or choose, but a collective intention that chooses and selects us. Therefore, we can not decide on such historical processes and determine the dates and ways ", said Kurti.

Attitude towards the "Open Balkans"

Prime Minister Rama also touched on the "Open Balkans" initiative where he said that Albania and Kosovo have two different approaches and opinions, but these according to him do not constitute any obstacle to strengthen relations between the two countries. Rama said that he is optimistic about the strategic point of view for the "Open Balkans" while adding that it is an open debate both for him and for Kurti. "As far as the Open Balkans are concerned, we have two different approaches, attitudes and opinions. You and I should not think the same about all things. So I think these different opinions do not pose any obstacle to strengthening the relationship between us. If you allow me to refer to the two-headed eagle, the body stands straight. The eagle is informed in 360 degrees do not have any doubt that the two-headed eagle is in danger of being caught by surprise, visually checks both sides. It is an added value that we are a two-headed eagle. When we are with one head, the risk is to cross ourselves than today when we do not have this luxury and this purpose. I am optimistic about the strategic perspective for the Open Balkans. It is an open debate for me and Albin. "We can not stay without thinking and we have a problem if we think the same about all things", said Rama.