Izet Haxhia: I did not ambush Azem Hajdari, before he was killed he had a meeting with Sali Berisha

Unexpected / Fifi makes the drastic decision, the residents do not restrain themselves, they burst into tears

The powerful storm will hit our country, learn how the weather will change tonight and what is expected to happen tomorrow (Follow everything LIVE) 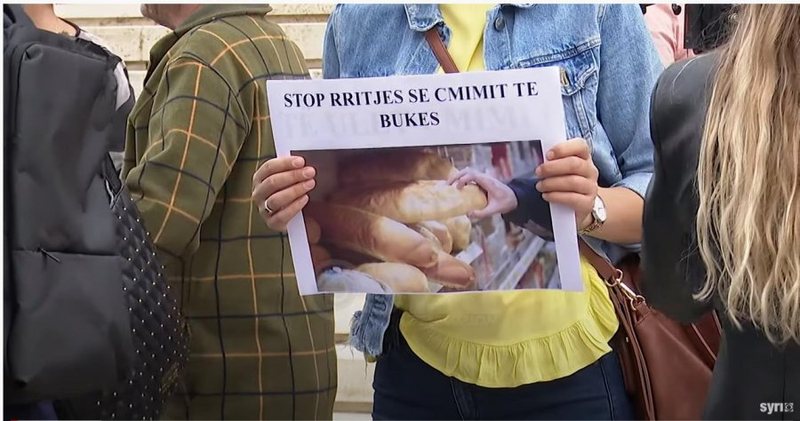 The increase in the price of bread has led citizens to gather again in protest for the third time. Dozens of citizens gathered in front of the Prime Minister's Office yesterday to protest against the increase in the price of bread as well as against the increase in food prices. This is the third protest in a row to raise prices, a peaceful protest calling on the government to reduce prices. According to protesters, Albanians are not poor, but stolen from governments. "The question is why we are so poor and why we can not afford a price increase," said one protester. Another protester calls on Prime Minister Edi Rama to go down to the ground and see the poverty that has entered the homes of Albanian citizens. She said, that the government should abandon propaganda and support citizens. "I have been doing business since 1995, Mr. Rama told you that there is no poverty here. I urge you to come out of our neighborhood that has retirees dragging their feet. All the young men and women have left. Politics is the fastest lever that brings transformation, if it does not bring it is propaganda. Abandon propaganda. Today I tell you that you must be an active part of politics to transform yourself and the nation. "Enough to leave this country, enough to leave this country", declared another protester. For several weeks, there has been an increase in the price of bread and basket products in the country. Also, the price of fuel has risen, while despite the energy crisis, the price of energy continues to remain unchanged. Meanwhile,

"Kosovo and Albania will unite" / News echoes in Serbia. Here is what the media write after the Rama-Kurti meeting

Another serious event in the country / A 15-year-old girl and her mother disappear, the Police are put on alert

The serious event in Vlora / The mother was thrown from the palace together with her 1 year old son, the Order of Pharmacists reacts with the touching post: We were shocked by this great loss, who was Pamela?

The gun attack on the bus with students, says the survivor of the massacre: A masked person opened fire with a cane and ...

Bad weather is sweeping our country, with heavy rainstorms expected in these areas today

The photos come out, here are the 2 students and the driver who were killed in the firearm attack on the bus in Deçan (NAMES)

Serious tensions and insults erupt / "You are a total idiot, you take me bad", a quarrel breaks out in the early hours of the morning, Arjola and Antonela almost beat each other: They are mentally handicapped ... (Video)

After the night of Friday's show, a strong quarrel broke out between two girls a...

Last night Fifi was present at the "Big Brother VIP" show, where she expressed h...