Albania and Kosovo hold a meeting of the two governments, customs points are removed and tariffs are eased, here are the agreements reached 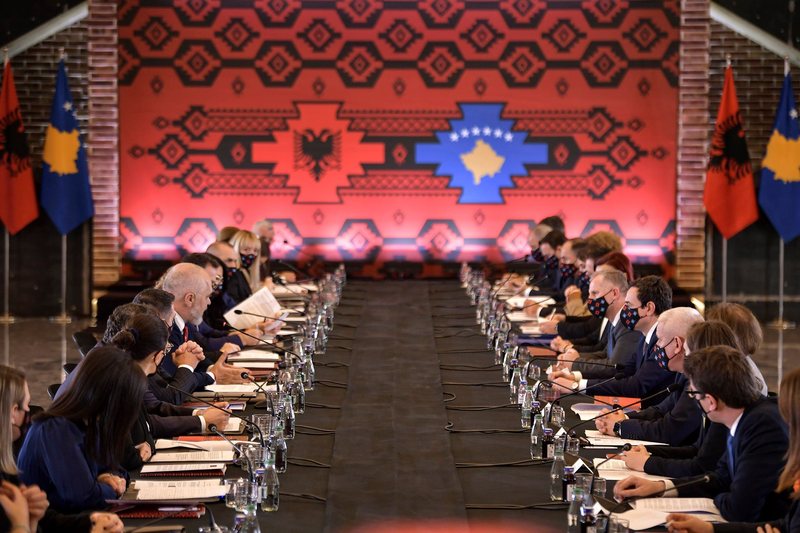 Albania and Kosovo held a meeting of the two governments yesterday. In the 7th joint meeting of the government of Kosovo and the government of Albania, which took place yesterday in the city of Elbasan, 13 agreements were signed. The agreements signed between the two governments were related to the abolition of customs points, the easing of tariffs and the installation of security cameras on the border between the two countries, etc. Regarding the agreement on the abolition of customs points, this was one of the agreements reached yesterday between the two governments to have a common customs point, where it was the Prime Minister Edi Rama and the Prime Minister of Kosovo Albin Kurti who signed the agreement. It consists of the opening of the joint border crossing point Shishtavec (Kukës) - Krushevo (Dragash). Another agreement reached was the one on the facilitation of customs procedures, which will bring mutual facilitation in customs procedures and control of entry and exit of goods between Albania and Kosovo. Already with this agreement reached, the two countries will have easier procedures in customs, an agreement which has been proposed before, but which has already been reached. Thus, the tariff facilitation agreement aims to facilitate the free movement of goods and people. Another agreement reached between the two governments was the cooperation protocol between the Council of Ministers of the Republic of Albania and the Government of the Republic of Kosovo for the establishment of the Intergovernmental Coordination Secretariat,

Meanwhile, another agreement reached between the two governments was the agreement on the facilitation of procedures and conditions for obtaining a temporary residence permit. The abolition of the temporary permit between the two countries means the abolition of the criteria provided in the relevant law for foreigners for equipment with a temporary residence permit, with a term of 5 years. Another agreement had to do with the rules of the local border traffic regime. This agreement makes possible the facilitation of the life of the inhabitants on the border of the two countries Kosovo-Albania, who can now with facilitated procedures cross the border in certain defined areas along the border between the countries. Other agreements reached were one on mutual legal assistance in civil and commercial matters,