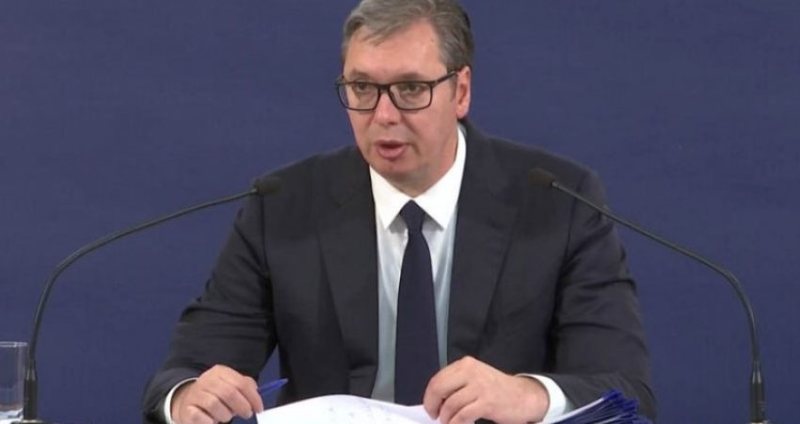 The Prime Minister of Kosovo, Albin Kurti, and the President of Serbia, Aleksandar Vucic, will meet in Brussels on August 18, after the increase in tensions in the north of Kosovo as a result of the implementation of reciprocity measures by the Kosovo government. In a reaction to the media, Vucic emphasized yesterday that he is going to Brussels for the dialogue between Belgrade and Pristina, in order to try to maintain peace and stability, because this is his only goal. But while he was talking about the peace that awaits after this important trip to Brussels, he presented the new weapons and military equipment newly produced by the local industry for special purposes for the needs of the units of the Armed Forces of Serbia. So Vu?i? is taking a two-sided stance, as he calls for the establishment of calm, publicizes weapons 'made in Serbia'. While talking about weapons, he said that the increase in the demand for weapons is a clear indicator of the direction the world is taking. It seems that the Serbian president is acting 'innocent' in the eyes of the Westerners to avoid punishment from their side, but he is not giving up the scenario of armed conflict. Vucic refused to comment on the position of the EU, where he called both Serbia and Kosovo equally guilty.

President Aleksandër Vucic spoke proudly about those products, stressing that everything can be sold within 3 days. The huge demand for weapons, according to him, is a clear indication of the direction the world is taking. Among the most important products, he mentioned the self-propelled howitzer "Nora", the armored military vehicle "Lazar 3", the combined self-propelled air defense system "PASARS-16" and the new model of the pistol "Zastava". He also announced that within this year, the arsenal 11 multifunctional helicopters will be added to the military of Serbia.

Vucic talks about the meeting with Kurti in Brussels

The Serbian president also commented on the recent tensions with Kosovo and mentioned his intentions in the meeting with Prime Minister Albin Kurti in Brussels. "We will go to Brussels to maintain peace and stability, this is our only goal. We are not threatening anyone, we just want to ensure respect for international rules, respect for norms, from Resolution 1244 to the Brussels Agreements." As for the issues of reciprocity for license plates, the implementation of which Kosovo postponed until September, Vucic said he will maintain this position. "When it comes to license plates, the situation is clear. They can forcefully implement the decision, but don't expect Serbia to help you in the process of legal regulation of the problem, especially when this decision is against the people of Serbia", Vucic said. He further added that "everything is possible with violence, but it is not known for how long. Look what they are burying the cisterns, the smeurija, like little children playing, imagining that they have a state, but those who hold it know nothing. We will discuss everything and raise all issues. But we will see in two or three days if it will make any sense or not, which I am more inclined to believe," said Vucic. The Serbian president will have a busy agenda this Thursday. In Brussels, he is expected to meet with the Secretary General of NATO, Jens Stoltenberg, and the special representative of the United States of America for the Western Balkans, Gabriel Escobar. The main discussion will be about the formation of the association of Serbian municipalities in Kosovo, but also regional security issues. Meanwhile, earlier,