"Football by the Drini", a great sports and artistic spectacle in Debar 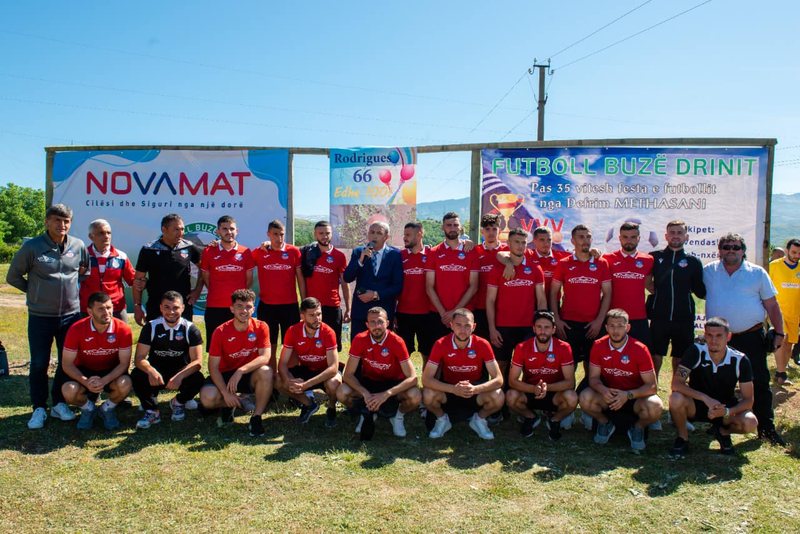 Korabi of Peshkopia will have an important "play-off" duel with Apollonia, with the hope that it will succeed in capturing the final and winning it to climb to the Superior Category. But in Debar the most sensational event of the weekend we left behind was a special activity organized by the well-known sports journalist, Defrim Methasani, former physical education teacher at the school "Myslim Shyri" in Fushë-Çidhën, who returned to this area to organize after 35 years sports competitions. The event turned out to be a great sports and artistic event in Fushë-Alie of Dibra, in one of the most beautiful places in Albania, by the river Drini i Zi. Many people who were born in this area contributed to the organization of the event, while many friends and guests had come from different cities of the country and even from many countries of the world, bringing a festive atmosphere that was rarely seen during these years in these parts. The Municipality of Dibra, headed by Rahim Spahiu, also provided assistance in the development of this activity.

The festive sports organization foresaw several football matches, where the organizers had included a total of 4 teams with very significant names such as "Locals", "Former students", "Diaspora" and "Journalists", with an elimination system. In the end, the "Football by the Drini" tournament was won by the "Diaspora" team coming from Belgium. Various medals and cups were awarded to the winners. It should be said that on this occasion, certificates of appreciation were distributed for prominent names of football and sports in general that have emerged from this area. The enthusiasm was also increased by the presence of Korab's team. It should be said that personalities of sports, sports journalism in Albania, Kosovo and Northern Macedonia, as well as people of art, culture and education had chosen to be in Dibra on Saturday, to see and contribute to this great sporting and artistic event. The former football player of Flamurtari and the National Team, Kreshnik Çipi and many other names stood out with his presence. An activity that, as we mentioned, took place in one of the most beautiful and prosperous places in Albania, such as the Drini i Zi valley, where a community stands out for its values ??of hospitality, culture and sports.

Donations for the school

As part of this great event, one of the most exciting moments was the giving of donations to the school in Fushë-Alie. Sports uniforms, basic sports materials and 200 books for the library were a gift for the school's teachers and students. "Already relieved like never before. The mission was accomplished. Football along the Drini received its blessing, thanks to the hundreds of thousands of people who became part of it in Fushë-Alie of Dibra. I sincerely thank everyone who supported me, who supported me, helped me and motivated me. Where once the battles of war took place, where it seems that nature has painted by hand, there this May 21 football was played, cups, medals, uniforms, balls, songs were sung, dances were performed, tradition was unfolded, donated books and became a fan. I thank those people who welcomed us as befits Çidhna and Dibra ",

Qatar World Cup is expected to be the most expensive in history, only 8 stadiums will host it

Asllani is welcomed with applause at Inter, the Zikaltri are also planning the Plum

Renovation time in Milan, Ibra with "symbolic" salary, the Maldini-Massara duo is expected to become official

Tite attacks Pochettino: Whoever puts Neymar in the wing play is not a coach but an ass

Neymar "Non Grata" in Paris, PSG communicates the decision to the Brazilian!