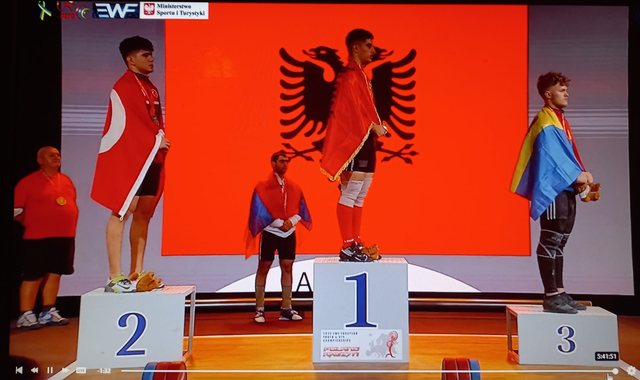 Phenomenon Ertjan Kofsha has amazed with his appearance at the European Weightlifting Championship for U-15 and U-17 ages that is being held in Raszyn, Poland. The talent from Štrmena, which is the next production from the hands of coach Leonard Toska, has excelled by winning three gold medals in the U-17 grumpshat.

Kofsha, who competed in the 89 kg weight class, produced a truly fantastic performance as he dominated his rivals, thus honoring Albania in this important barbell event for the ages. Kofsha recorded outstanding results, lifting 145 kg in the deadlift, 168 in the push style, to close the competition with a total of 308 kg. Everything ends with the well-deserved celebration for Albania in this competition, while Ertjan Kofsha is considered without question as the great future of red and black weightlifting.

Thus, our national barbell team ends the European Championship with 6 medals in total, after a few days ago, as is well known, Enkileda Carja won three bronze medals for the U-15 age group. Very promising results, which confirm once again that weightlifting remains absolutely the most successful sport of the country in the international arena.

The new FIFA ranking is published / Brazil is first, here is the place occupied by Albania and Kosovo

Messi gives the unexpected announcement to the fans: This will be the last year that...

Albanian wonders have no end! He paid over 100,000 euros to transfer to Ajax, the player was deceived

Football mourns the passing of the legendary coach, who was once a part of Juve

Unbelievable but true, the midfielder scores the goal of his 'life' from 56 meters away (VIDEO)

Calhanoglu reveals who helped him score against Ter Stegen

Benzema has decided to renew his contract with Real

Judo/Kosovo in the World Cup without the Olympic medalist

Broja in the focus of Milan, next summer the Albanian will be part of Serie A

Age friendly, Bulku and Behari prepare U-17 and U-18

Analysis/ The teams that make the best play in the wings, Partizani leads