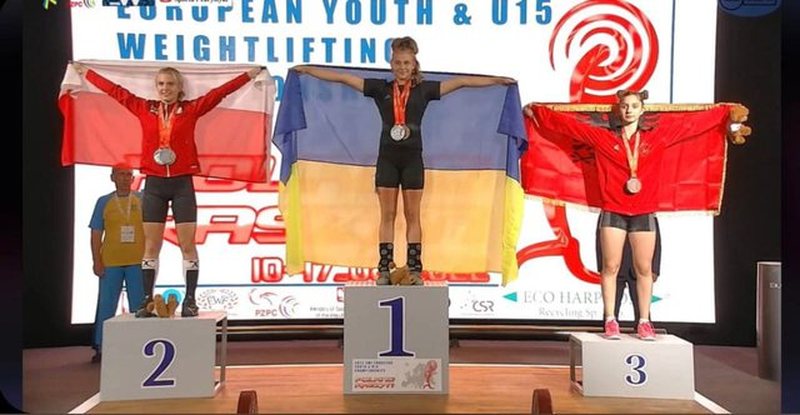 In the European Youth and U-15 Championships, Albania registered an important international success, as our athlete Enkileda Carja won three bronze medals from this event, one in each style, giving honor to herself and the Albanian barbell in international activities , moreover this was the most important continental activity for ages. Tsarja started her competition in the breakaway style with high hopes, and managed to lift 69 kg in this style, a result that placed her in third place, so she received a bronze medal in this style. After a short break, the push style started, which was also competitive and quite strong. In the second test, the athlete lifted 83 kg, deserving the third place, i.e. the bronze medal. Enkileda Carja lifted a total of 152 kg in two races, which gave him another medal in this activity, again bronze. So, three bronze medals for the Albanian sportswoman, who thus appears not only as the country's champion in women's weightlifting, but with great premises at the international level, as the successor of worthy names such as Fetije Kasaj and Romela Begaj. The emotions of the technical staff of the national team located in Poland were great, and in their first media statements, they expressed their joy for achieving the medals and at the same time the promise that this sportswoman will write history in the sport of weightlifting in the future.

Coach Kalemi expresses the emotions of the competition

Elbasan's coach and weightlifter Carja's personal technician, Eglantina Kalemi, also expressed her excitement after the race, who said that it was expected that the athlete would enter the medal zone, but not with three medals, and not so convincingly and promisingly on the podium. "Climbing the podium was expected from our side because this success is the fruit of a rigorous 5-year work. We are satisfied with the result as the battery and opponents were of a high level and two of the competitors were Polish. As our first experience in international competitions, we are satisfied. It is a success for the athlete to start with a medal in her first major international activity and an impetus for other activities", Kalemi said, among other things.

On Sunday, it's Kofsha's turn

The athlete Ertjan Kofsha from Shtërmeni also participates in the European Youth Championship in Poland, which is led by the well-known coach of our weightlifting, Leonard Toska. The athlete has high expectations and, if things go as predicted, he will return home with gold medals. Kofsha is regarded as one of the biggest phenomena of the Albanian barbell and it is natural for coach Toska to expect the maximum from him. The athlete has been sent to several important competitions this year, to gain experience and to face the strong and since this is the European Youth, then his chance and moment is now. Everyone wishes that he will fulfill what he has achieved in the training sessions, as it is a very high result. For now, the bronze medals that Enkileda Tsarja brought should be enjoyed.

"Let's make them respect us", Reja talks about the challenge with Israel: No alternative but victory

They "enraged" Serbia, Switzerland denied Xhaka and Shaqiri the double-headed eagle at the World Cup in Qatar